How to write warm emails

That's because serendipity in real-life comes at a premium.

You have to be at the right place, at the right time to strike gold. You will need to jump over loops, be able to get favours, tackle people and conversations to get what you want - and in the end, this would just get you a 1-2 minute conversation with someone important. The fancy term for this is “warm introductions”.

'Online' serendipity - like many things 'online' - is straightforward. You are "only” an email away from a potential investor, a mentor, or a customer.

Nothing beats getting a warm introduction to someone but cold emails don't have to be "cold". They can be warm.

Let me give you two personal examples of not-so-cold emails - one which worked and one which didn’t. The emails went to two of my favourite startup people when I was trying to collect and organise my thoughts around an idea.

Your 'warm' emails should take you a lot of time to write, which is good. Each email has its own set of characteristics depending on whom you are sending it to i.e. here, your motive with warm emails is to build a long term relationship with the person you are sending it to.

And so, the receiver should feel that you have done your homework and you are not someone who is just sending the same mail to a lot of people and expecting to get a response.

At its heart, it's just talking your heart out - nothing else. No fancy salesmanship or trying to impress.

The best warm emails are honest, actionable, and waste no time for the reader. There is no fluff nor beating around the bush and ideally, it wouldn’t even cross 2 or 3 paragraphs.

For my first mail that worked, it started with an incredibly personal and heartfelt message. I had been following this person's content for last 5-6 years or so. He has had an impact on my viewpoint of the world much more than any other figure at the time and I believe it was his answers that sowed the seeds for entrepreneurship early on.

The best warm emails you will write will be automatically for the people who you believe the most in,- you will be at the most genuine, honest version of yourself - just like how water flows inevitably through a bed of rocks - this works almost always. 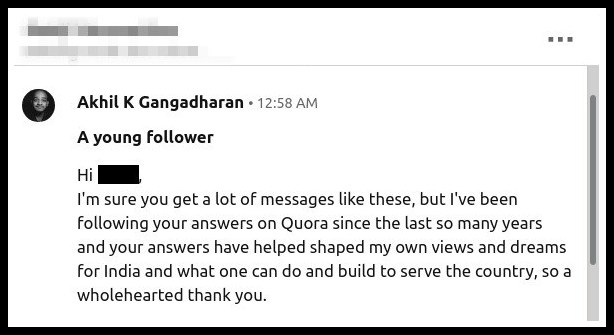 Watch the subject line, it is eye-catching. From his perspective, it’s actually relatable. The receiver in this case is a popular writer on Quora and as was described in one of his answers - at one point, he was a 'young follower' himself. The rest of the email described my startup where I asked him for his feedback. This worked and he responded.

For the one that didn’t work - the principles remained the same but I focused too much on “getting help” rather than “connecting” - it started with this:

And this was at the end:

Reading it now, it just feels like a cooked up half-assed effort to get some feedback.

Go back to top